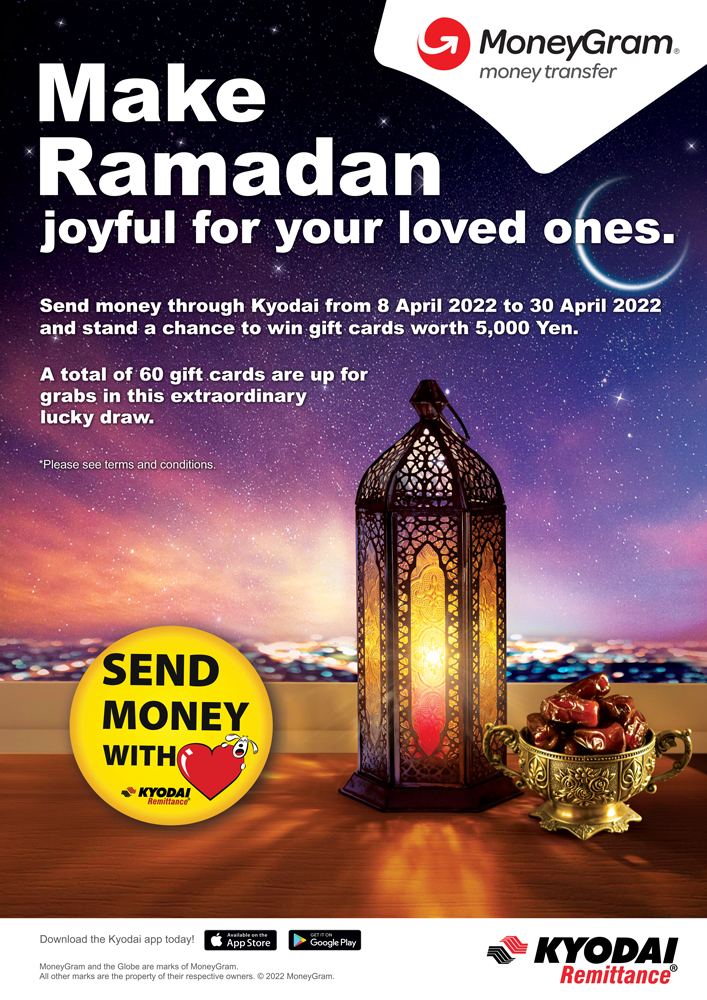 Make Ramadan joyful for your loved ones!

1.1 This lucky draw (the “Promotion”) is sponsored and conducted by UNIDOS Co., Ltd. having its address at

1.2 Officers, directors, employees, independent contractors, interns and agents and other representatives of the Sponsor and its parent company, subsidiaries, and affiliates and its retail agents, advertising agencies and any other company or individual involved with the design, production, execution or distribution of the Promotion, including but not limited to, their family members and relatives up to the second degree of consanguinity, affinity and individuals living in the same households of each of these individuals (collectively, together with the Sponsor, the “Promotion Entities”) are ineligible to participate in the Promotion or win prizes.

(i) The first MoneyGram send transaction to an eligible destination country specified in section 2.1.2 above, that a Participant conducts at any of the Sponsor’s locations (“Participating Locations”) through the Kyodai Remittance service during the Promotion Period is a qualifying transaction for the Promotion (no minimum amount is required for the transaction) (“Qualifying Transaction”).

3.2 The Winners will be randomly selected from the entries via an electronic draw where a number will be assigned to each Qualifying Transaction.

3.4 The Sponsor will notify Winners. Winners will be advised to collect their prizes from one of the Participating Locations or as per the Sponsor’s direction.

3.5 The prizes shall not be transferred, nor exchanged, nor redeemed for cash. Winners are responsible for tax liability flowing from the prize, if applicable. The Sponsor reserves the right to substitute the prizes with others of equivalent value.

3.6 To claim the prize, Winners must present at least one (1) valid ID and proof of the relevant Qualifying Transaction.

3.7 Failure to accept and collect the prize within the period specified by the Sponsor will result in forfeiture of the prize and the Sponsor may award such prizes to other alternate winners selected at the same draw. The transport and other related fees that will occur for the collection of the prizes will be borne by the winners.

3.8 If any Winner is subsequently found not eligible to participate in this Promotion, the Sponsor may at its sole discretion forfeit or reclaim the prize and award or dispose of the same in such manner and to such person as it deems fit.

4.1 Neither the Sponsor nor any other person or party associated with the Promotion shall be liable for any loss nor damage (including but not limited to indirect or consequential loss or damage or death) suffered or sustained in connection with either participation in this Promotion or with the prizes offered.

4.3 Winners agree to grant permission to the Sponsor and its partners to use their name, state/country of residence and prize information for advertising and promotional purposes in connection with the Promotion without additional compensation, except where otherwise prohibited by law.

4.4 Winners who do not wish to take part in this Promotion may either communicate the same to the Sponsor or decline to accept and collect the prize within the deadline specified for the same.

4.5 Notwithstanding any contrary provision in any of Sponsor’s privacy policies, Participants grant to the Sponsor, and it reserves, the right to use any and all information related to the Promotion, including information provided by Participants in connection with the Promotion, for marketing purposes unless prohibited by law.

4.6 By accepting these terms and conditions all Participants (i.e., the data subjects) agree that personal data shall be collected and processed by the Sponsor and stored on the Sponsor’s database and used for the administration of its ongoing relationship with participants and in connection with the Promotion. All participants have the right to access their personal data by writing to the Sponsor at the address mentioned above.

4.7 The Sponsor reserves the right to amend these terms and conditions or to cancel, alter or amend the Promotion at any stage or to replace the prizes with other prizes of equal value if deemed necessary in its opinion or if circumstances arise outside of its control.

4.8 The Sponsor’s decisions with respect to the Promotion shall be final. Participants further agree to be bound the same which shall be final and binding in all respects.

4.9 These Terms and Conditions supersede all other prior terms and conditions, understandings, arrangements, or agreements, whether verbal or written, in relation to the Promotion.

4.10 This Promotion is subject to the laws of Japan.